A nostalgic design metaphorically and literally drawing from decades of heritage created by a passionate team and a skilled visionary- that is what the new Z embodies.

At a studio tucked away in a nondescript location in Culver City, chief product specialist Hiroshi Tamura-san, a man of passionate brilliance, and a group of automotive enthusiasts gathered to celebrate the creation of a vehicle that enthusiasts thought would die in an age of tight emissions regulations and invasive driver-aid technological advancements. 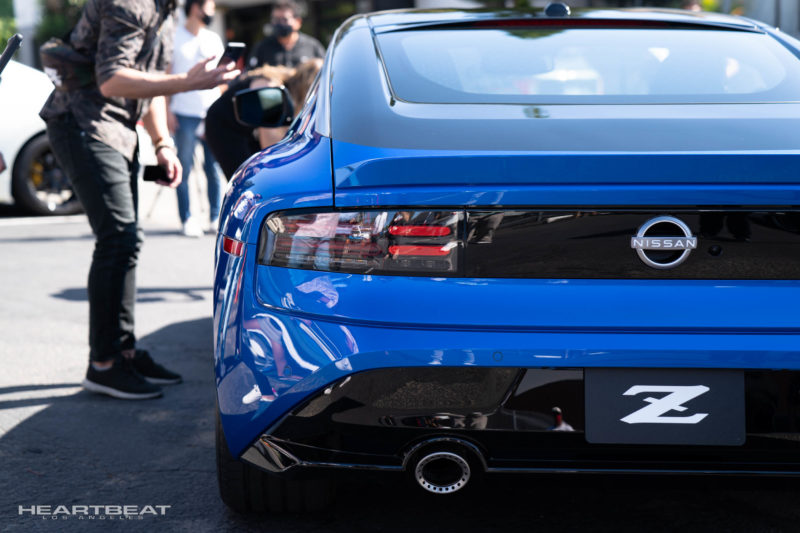 The presentation by Hiroshi Tamura-san at this event was riddled with a ton of buzz words and phrases that communicate design and emotional concepts that can be difficult to grasp at first glance- “Zenith of Z-ness”, “Lust Then Love”, “Beauty & Beast”, “Dance Partner vs Mobile Suits”, and so on.

However, one concept remained clear: “Z” is a representation, mathematically and by nature, of something that is without limit. Through creative engineering and smart design work, dreams can overcome limitations and possibilities suddenly present themselves in ways of familiarity. 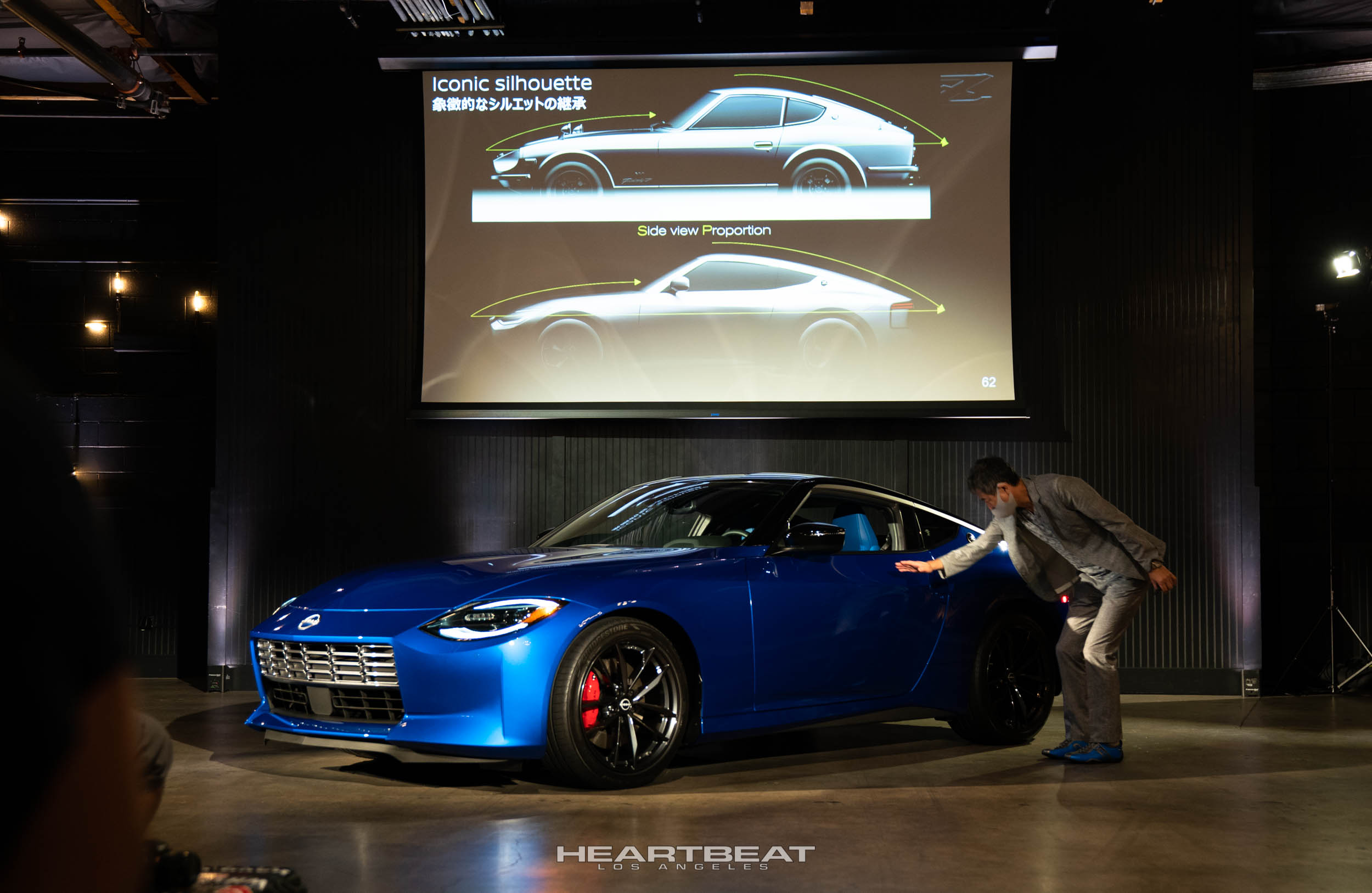 An iconic look; a familiar feeling.

At first, the car seems to be a mish-mash of a bunch of generations of the Z. This is not by accident; in fact, it is completely intentional. Many people may consider these design cues to be lazy, but to make all these elements work together in a cohesive package takes incredible skill.

Over 400 sketches were drafted to bring this dream of a new Z to life. Tamura-san emphasized that it is over 5 times the normal amount of drafting in this industry for an automobile. 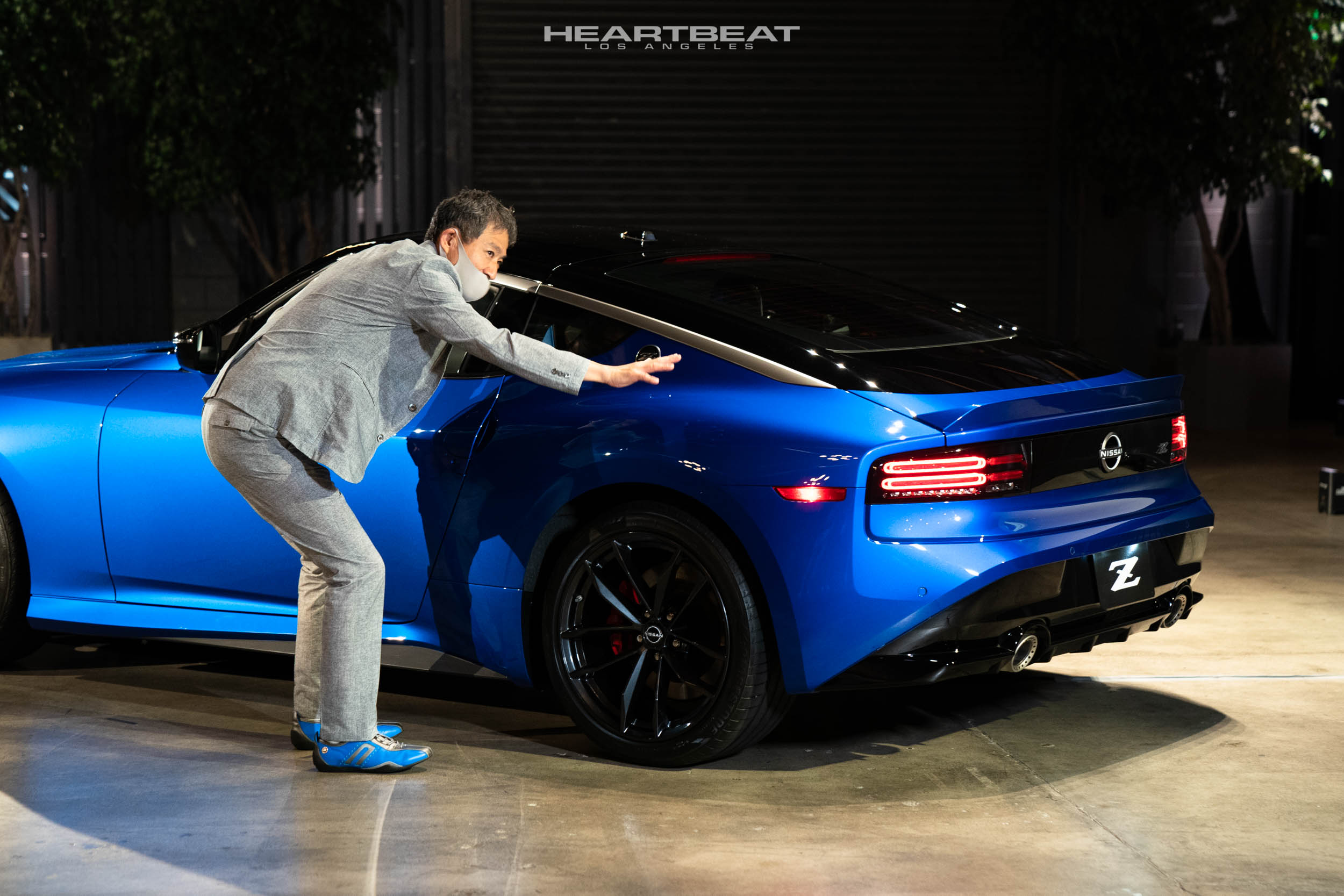 The “katana” silver accenting trim follows the roofline and helps reinforce the sharpness of the car’s stance. 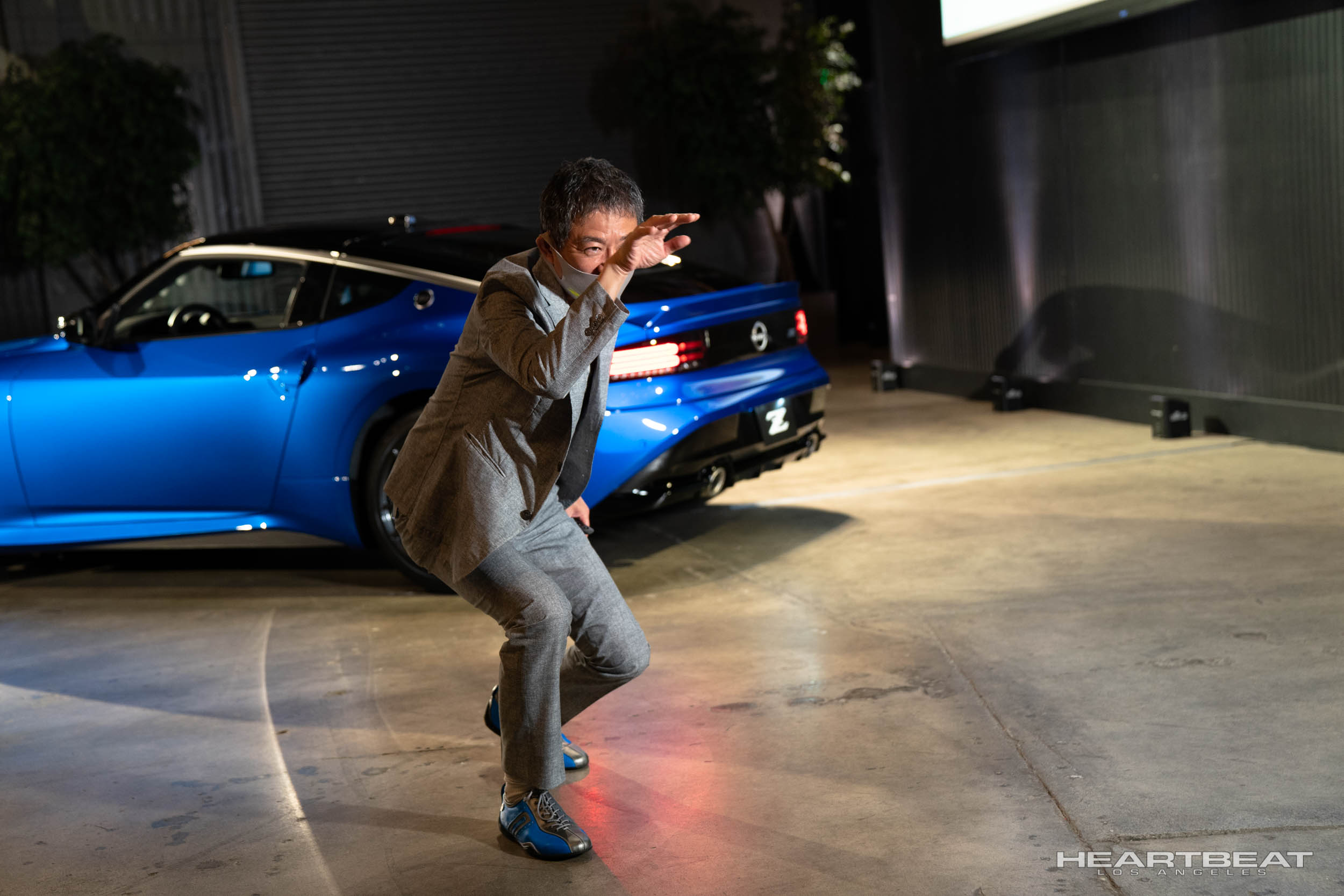 Tamura-san demonstrates how the rear haunch is accentuated by a massive upwards-jumping swoop to give it a strong stance and presence.

The front end borrows cues from the early Zs for its headlight halos. The roofline takes “katana” to a different level, introducing a metallic “blade” trim to sharpen up the rear stance.

The tail lights have a silhouette that is borrowed from the 300ZX. They have a 3D design that uses refractive light tricks to give it depth. As the light passes through plastic rings, the light bounces around the housing and refracts off of two distinctively cut surfaces on the rings, allowing it to glow brightly.

The result is stunning and Tamura-san emphasizes that the goal of over-engineering the tail lights is to make it pleasurable to stare at, especially when you’re stuck in LA traffic on the 405 during your commute home. What a relatable man he is. 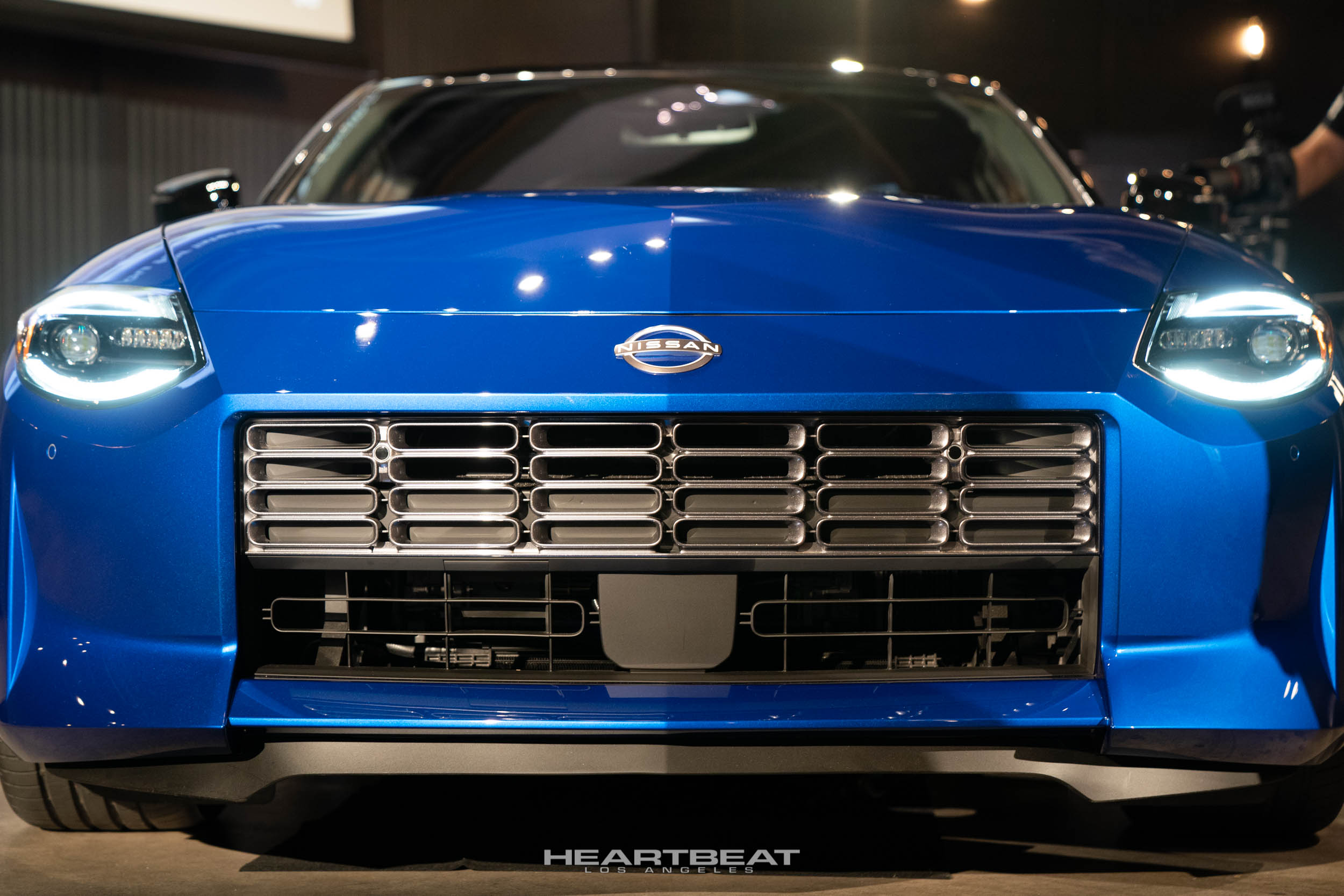 The front end everybody has been talking about.

Alright, here’s the unavoidable part of the conversation- the massive grill up front and center. Why was this designed this way? sUreLY thERe hAs TO BE a better way to exeCUtE A noSTALgiC lOOK USIng moDERn TecHnOlogy!

Well, Tamura-san is very well aware of the chatter that’s circulating the web. It’s actually a bit more complicated than just designing for looks. The engine not only needs a ton of cooling, it also needs it to be delivered in an effective way.

The design of these upper and lower halves of the grill have a strong emphasis on air flow versus the maximum allowable open area. In other words, even the thickness of the plastic bars which connects the lower grill together is shaped so specifically that even shaving or grinding away material would change the amount of turbulent high pressure that occurs behind each plastic bar. Direct and smooth air flow is the name of the game here and its a very challenging balance to achieve in conjunction with beautiful design work. 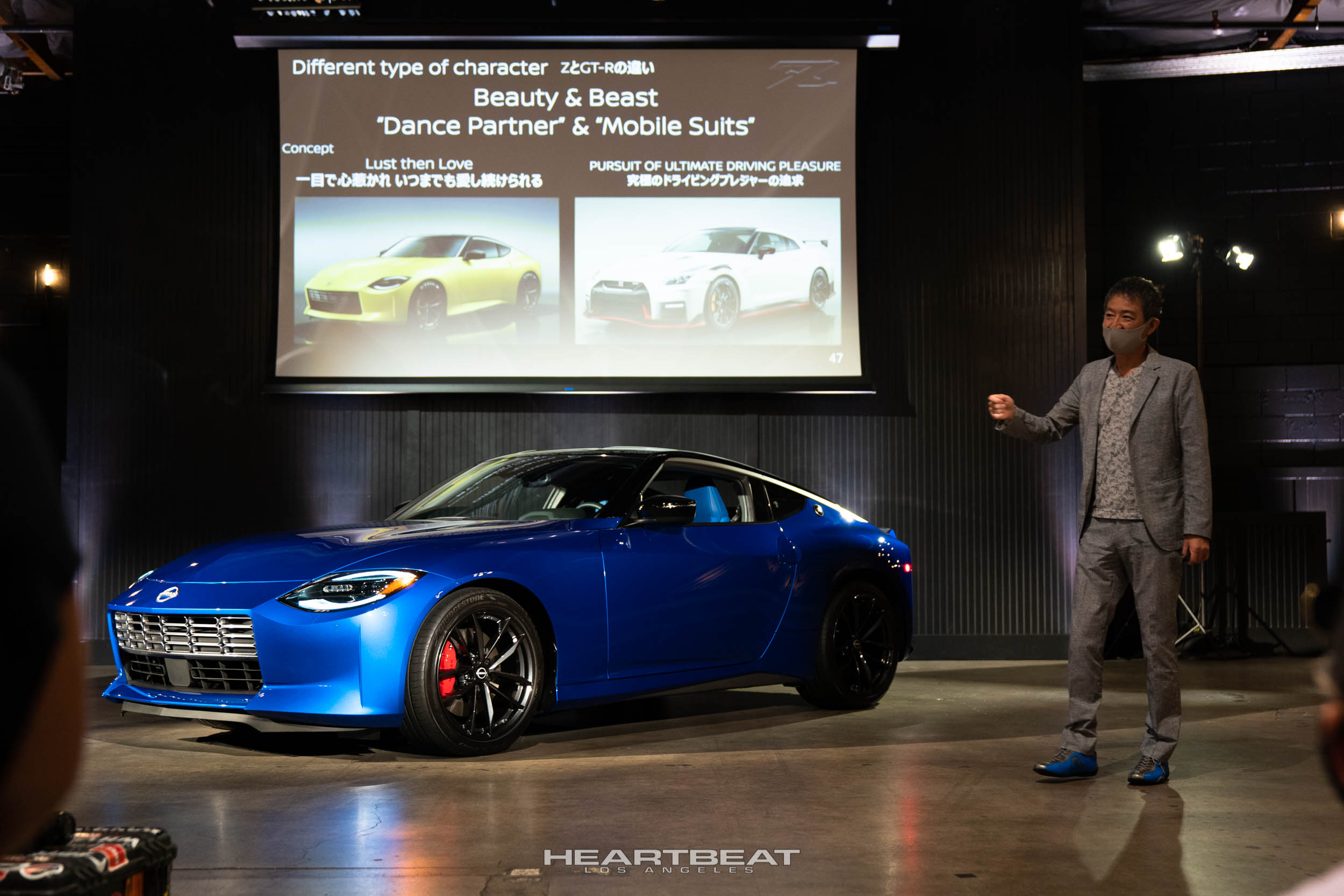 If you’re going for the ultimate driving pleasure, there’s already a car for that.

“Lust Then Love” is a concept meant to communicate how a driver should feel in this car. In no way is this car supposed to represent or feel like the ultimate sports car.

Nissan wants the driver to have a desire for what it stands for- a car of enthusiasm and passion. Once you’re in, you’ll develop a love for it through its driving characteristics. It’s supposed to be your “Dance Partner”. There should be an elegance to your actions- a special kind of touch will give you rewarding feedback. Once you’ve spent enough time with the car, you can take it to the next level, as long as you respect its boundaries.

If you want the best, go for the GT-R. It will perform consistently with every stomp of your right foot thanks to the technology available in the car. If you want a passionate drive, consider looking into the new Z.

Let’s face it- you’re probably here to peep at specs, so here’s what’s projected for the production car:

These specs show about a 23% increase in torque and 17% increase in horsepower compared to the naturally aspirated VQ37VHR available in previous Z cars while dropping the displacement, allowing for a tighter, neater and more responsive powertrain package. The engine has a sharp response combined with a light and smooth feeling. Based on the presentation graphs, the power is delivered in a linear fashion, allowing for a comfortable driving experience.

The car is no slouch and there’s plenty of headroom to play around with engine and drivetrain mods. A good amount of people at this event were also developers and engineers for the aftermarket parts industry, so expect a great selection of parts relatively soon after the car hits the dealerships.

Tamura-san mentioned that, compared to the previous generation of the Z, torsional stiffness increased nearly 11% while the rigidity of the hatch/rear door has improved by nearly 24%, reducing NVH caused from impacts from the road. As a result, internal testing suggests that the overall stiffness feeling of the car is comparable to the new Supra, and that’s a very impressive statement to make.

The steering response is also tightened up with the use of an electric power steering system that allows for a stiffer rack than what a hydraulic rack would allow for. Additionally, the front suspension is set up to have a good amount of negative caster, which allows for the steering wheel to return back to center more quickly and track nice and straight.

Jumping from a naturally aspirated engine to a twin-turbo powerplant means there will be more complications with heat exchange and extraction. To address these concerns, a thicker-core radiator and high flowing fans have been fitted to beef up the cooling capacity. Additionally, a water-cooled intercooler paired with an exclusive radiator for this system is present in the car, keeping the engine coolant and intake coolant temps as independent as possible. To top it off, an individual engine oil cooler and transmission oil cooler has been packed into the front of the car, further increasing cooling efficiency. That’s a lot of heat exchangers! 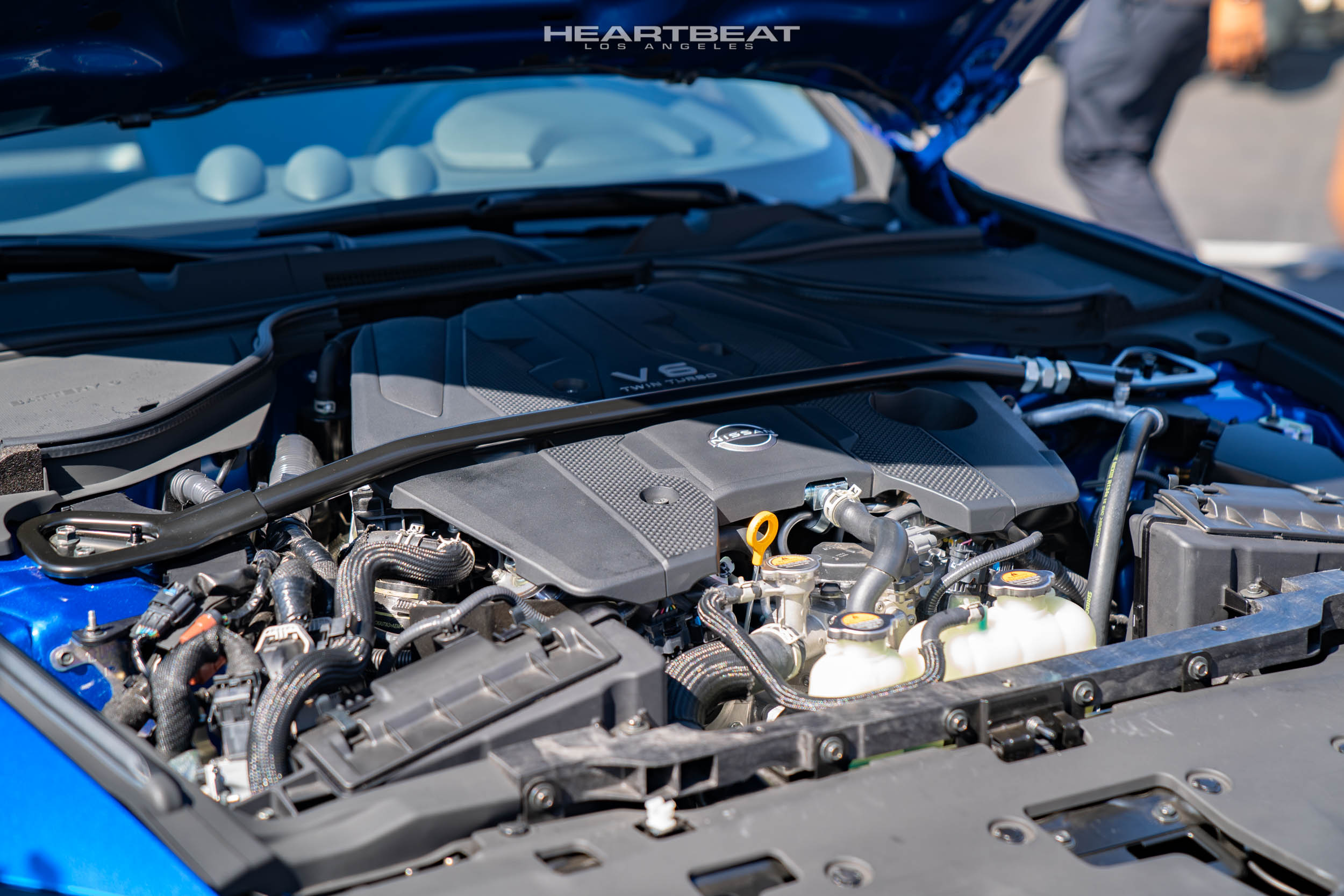 The engine bay is packed full of goodies.

With interior details still being finalized, it’s difficult to really comment on it other than the fact that the girth of the steering wheel is taking heavy inspiration from the R32 GT-R.

The development of the electronic cluster interface is being supervised by Tsugio Matsuda-san, a professional race car driver who competes in Super GT in the GT500 class. The cluster is expected to have pertinent metrics to help the driver develop a deeper sense of mechanical sympathy and hopefully use the information to not only get the best performance out of the car but also keep it running in tip-top shape for as long as possible. The cluster will also feature a new shift indicator that is bright and vibrant so the driver can focus on the road and still see the indicator in their peripheral vision.

Overall, the car is spectacular with its development planning. By the time it hits the streets, the New Z will be one of the most competitive new sports cars available at its price point.

Special thanks to Purist Group for making this event possible. 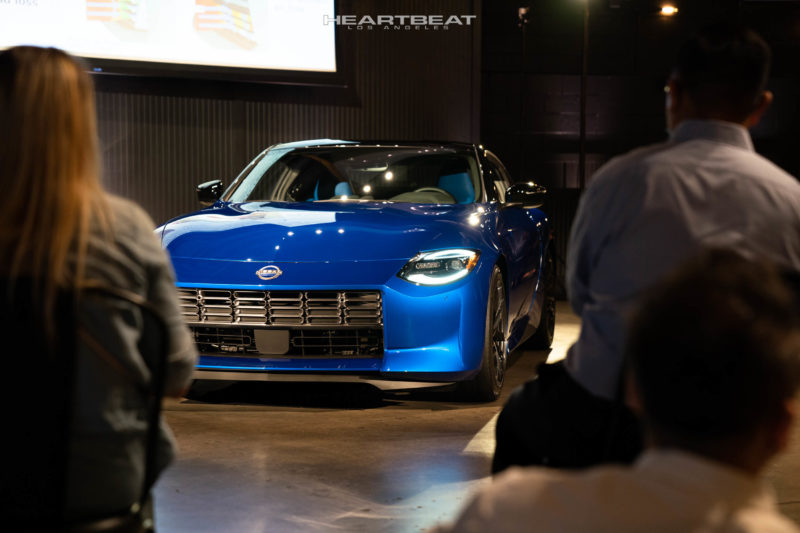 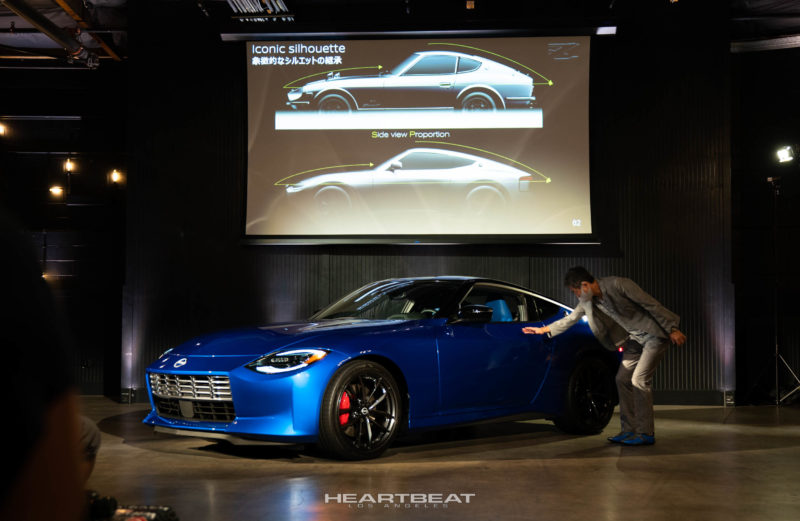 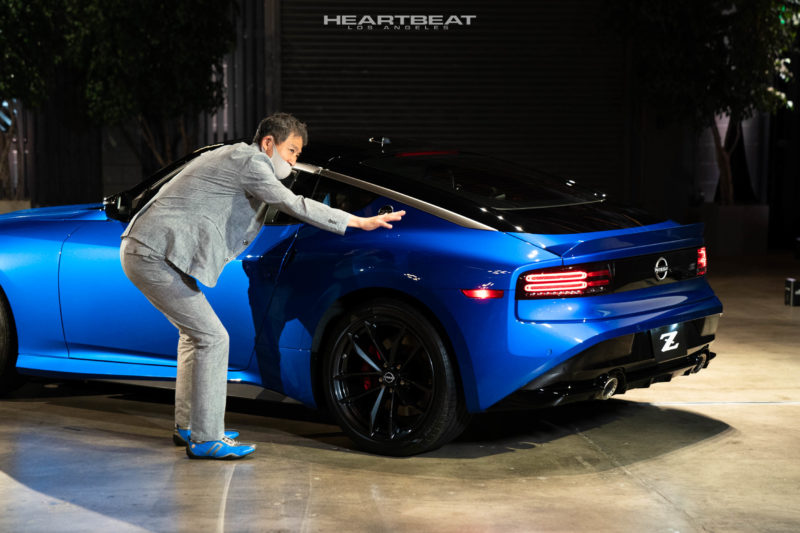 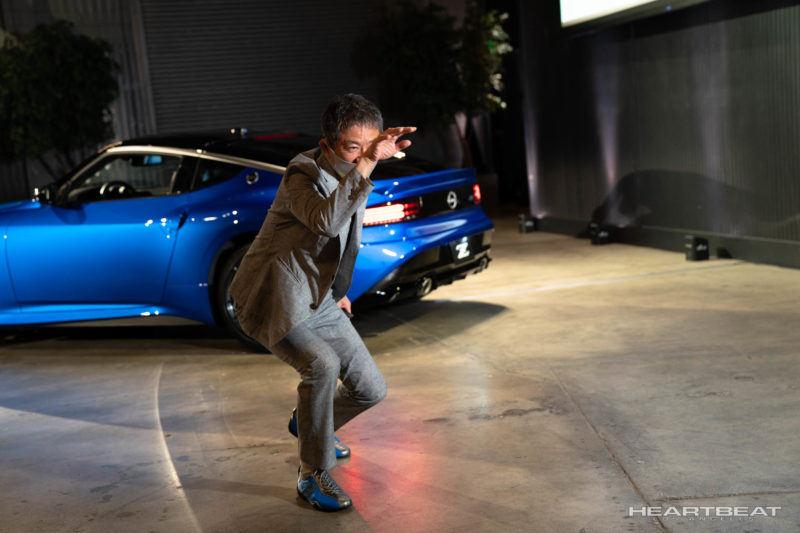 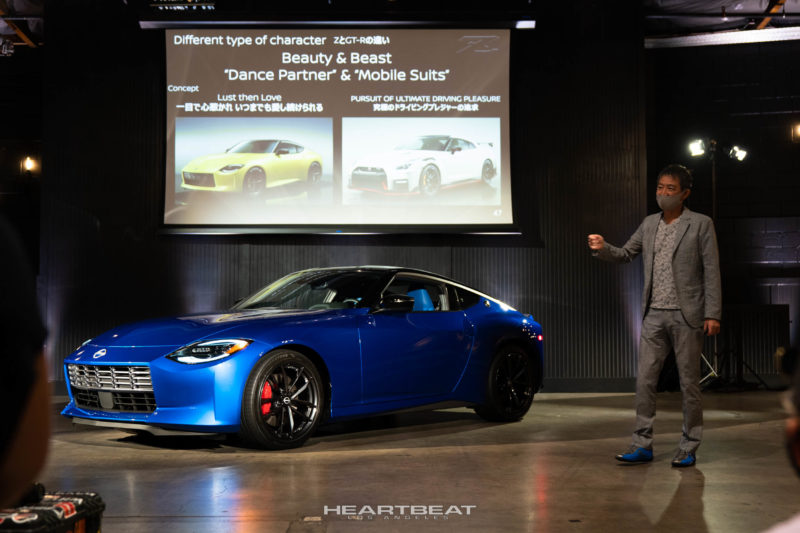 "Dance Partner" & "Mobile Suits" - There's a discernable more amount of delicacy to the New Z vs. the suited-up power-strike of the GT-R. 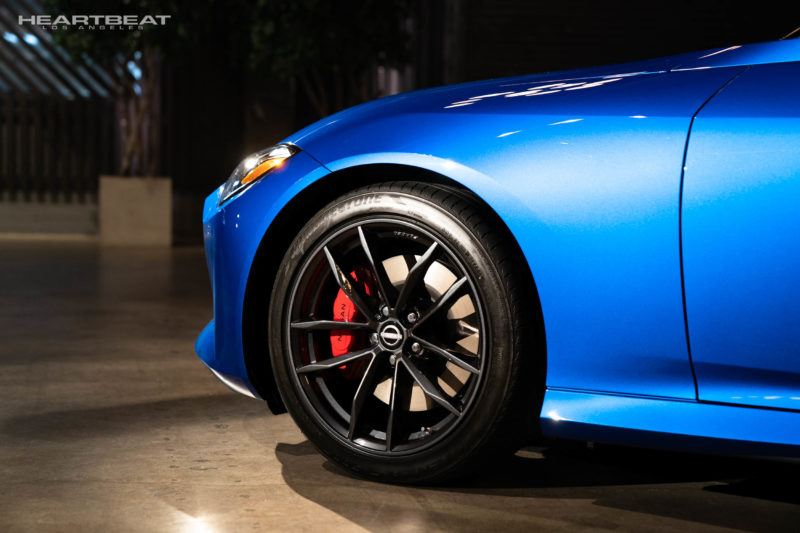 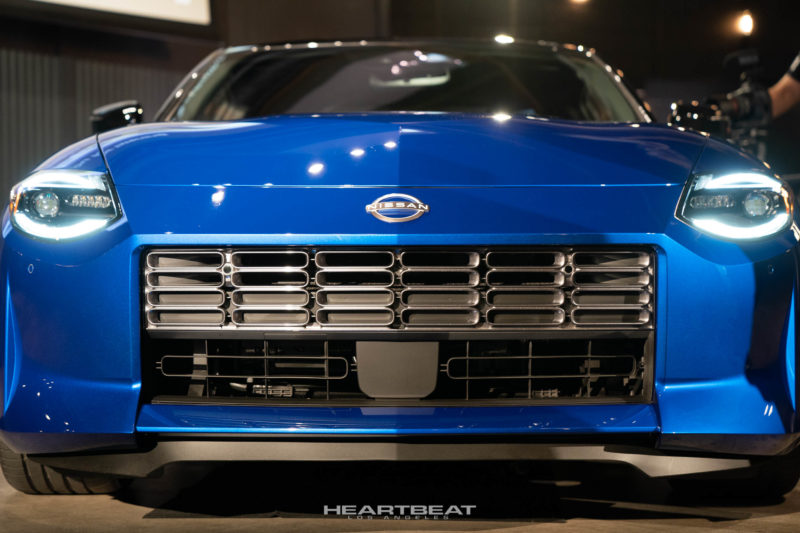 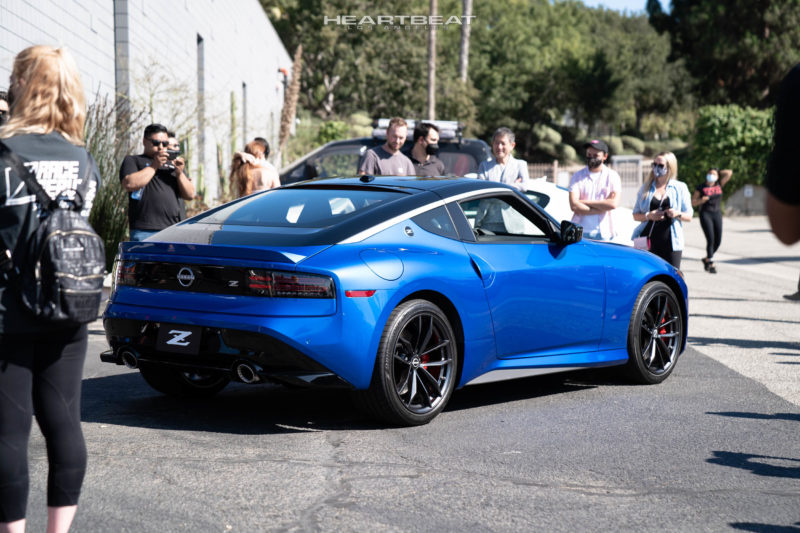 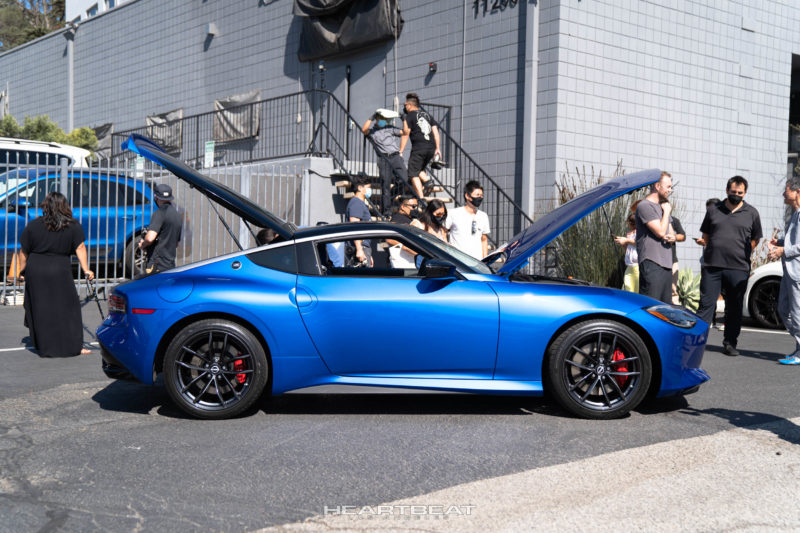 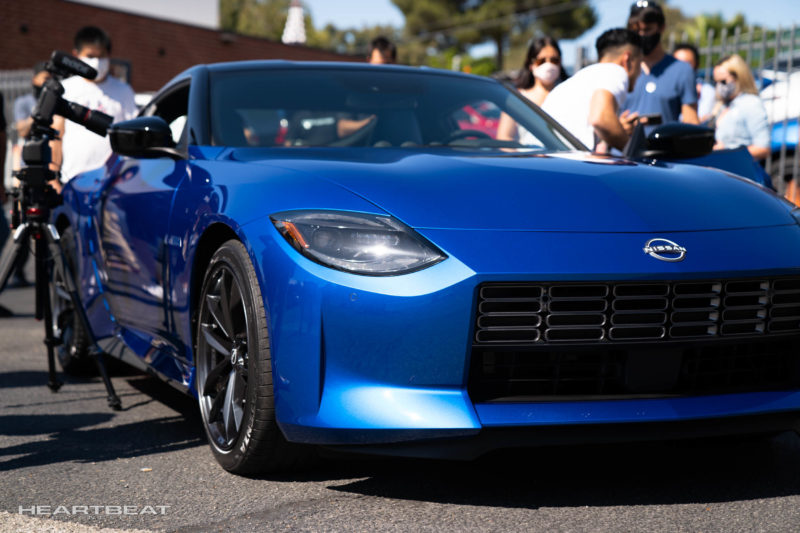 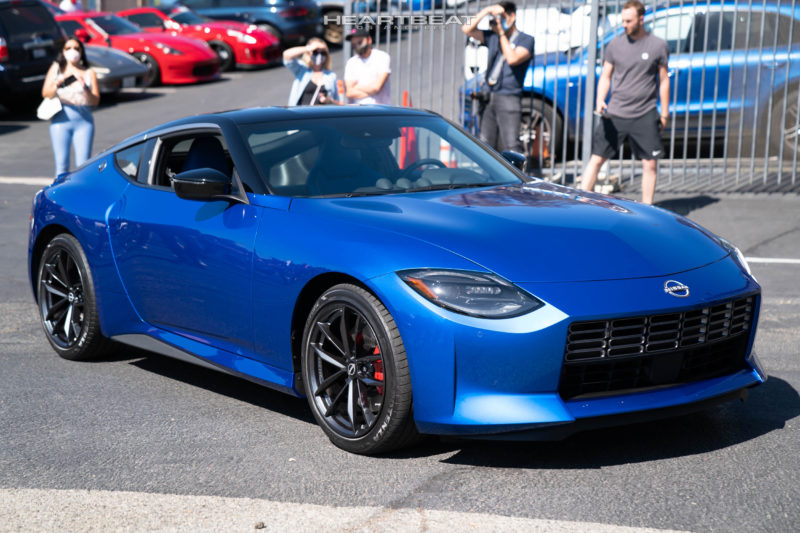 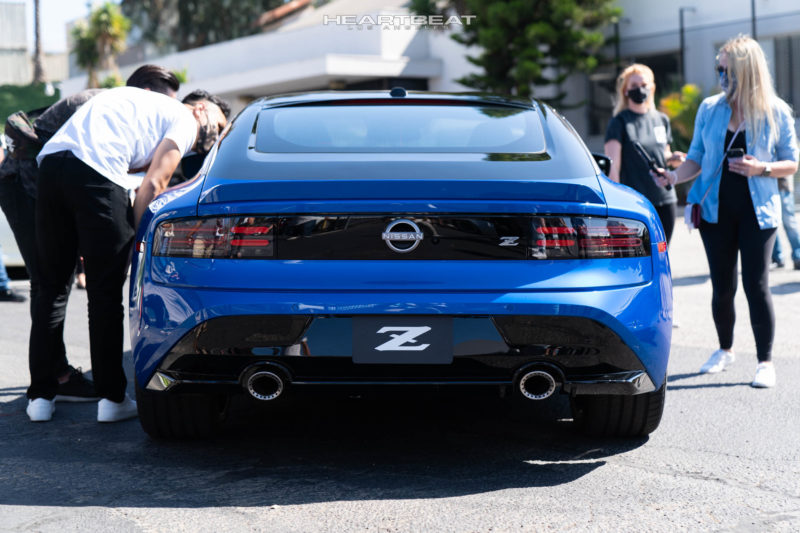 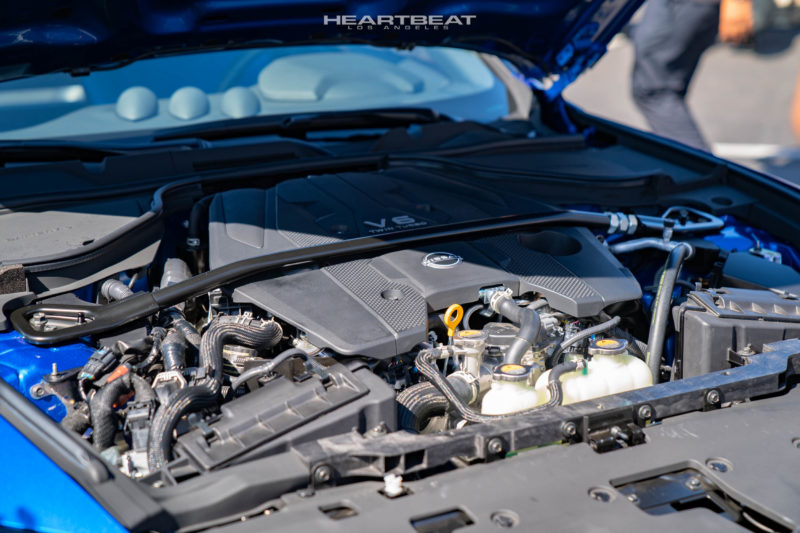